Descendants of Moses Crittenden Reunion plus Moore and West Updates

After a winter of organizing and tying up myriad loose ends, my summer is devoted to collecting new info. I am not sure why I am undertaking that as I still have so much research from prior trips to finish scanning and attaching to files.

However, the time is right as I have the summer on the road while I vacate my rental in Portugal to allow the owners to take advantage of renting it out at higher summer rental rates. While inconvenient, it is allowing me time to follow up on research on my Moore, West and Crittenden families. Here are updates on my summer plans regarding these three branches of my family.

Get together for all descendants of Moses Crittenden on September 1, 2019. We will meet immediately after the First Families Reunion on the Cherokee Heritage Center property in the Chapel. The chapel has tables, chairs, rest room, and is big enough to hold 30-40 people…..and is air conditioned! The Heritage Center closes at 5. We have access to the chapel as early as 1pm if needed.

Our start time of 3pm is approximate based on when the First Family Reunion concludes.  Any Crittendens are welcome, including descendants of Moses’ siblings, cousins, etc.

Bring photos, stories, questions so we can all share what we know and what questions we might still be trying to answer. I have some news to share about my drive through Georgia where I located the general area of land that William Crittenden and his family were living on before leaving Georgia for Arkansas in the 1830s. I will post more about that here when my summer of travel is over.

Descendants of William L West (born about 1803 in South Carolina)

By the 1840s William was in Alabama. A wide array of his great grandchildren, 2x and 3x great grandchildren, and other extended family, are on the hunt for his parents’ names and records of his earlier years in South Carolina. Three of us met in Greenville in June to comb through documents in the libraries of three different counties. And while we found some interesting information and possible leads, nothing that definitively tells us the names and origins of Williams’ parents and siblings. More about that trip will be posted here later this year.

I am very fortunate to have a well documented tree of my paternal line laid out in Timothy O’Rourke’s book, “Maryland Catholics on the Frontier: The Missouri and Texas Settlements”.

However, how did they get to Maryland? Was it via England or Ireland? Where do we really come from? I am hoping to find answers to these questions when I spend ten days in St Mary’s County, Maryland in September.

I started my genealogy quest with a few questions. I answered those questions long ago. With each answer, I had three more questions. And so it continues…

Finding out more about James R West, my grandfather, was one of the reasons that I started my genealogy research. James married my Cherokee grandmother, Eliza Crittenden, in 1903. I knew only broad strokes about their life together.

They married in Oklahoma Indian Territory in 1903. Sometime shortly after that they moved to Roswell, New Mexico where they lived until about 1917. I knew that James left the family in 1922 and, except for a one day visit to Tulsa in 1929, he never contacted my grandmother or his children again.

Since starting my research I have found out more about their life together, but I still have so many holes in their story.

Based on some correspondence with the Dawes Commission regarding my grandmother’s land selection, I had a feeling that James was not in the household during their last years in Roswell. In October of this year,  I finally made my way to Roswell to see what I could find.

I started with the Historical Society and their very helpful volunteer. Janice found a newspaper article that led me to do some research in the property file archives at the Chaves County Recorders Office. I found many land transactions in which James was involved, ending with charges being filed against him regarding some of those transactions. This mirrored activity by James that I had found several years ago in Wagoner, Oklahoma. Pages of land transactions concluding with him being sanctioned by a judge.

So, I went back to the newspaper archives. I found two more interesting articles about charges being filed against James for various crimes. My next stop would have been the court house to find out more about these charges and their resolution, but sadly I had to depart Roswell and my travel plans could not be changed. The wonderful Historical Society volunteer is going to see what she can find at the court house.

This week I decided to conduct a more intensive newspaper search and was overwhelmed by what I found, coverage of multiple charges and trials involving James R West, including horse smuggling, jury tampering, and attempted murder!

Clearly, my research will continue. I know that I will find out more facts, and hopefully find the court records regarding these cases. However, will I ever know the story surrounding the facts? What led James, who appeared to have a successful livery business at the time, to his actions? How did it impact my grandma, Eliza? 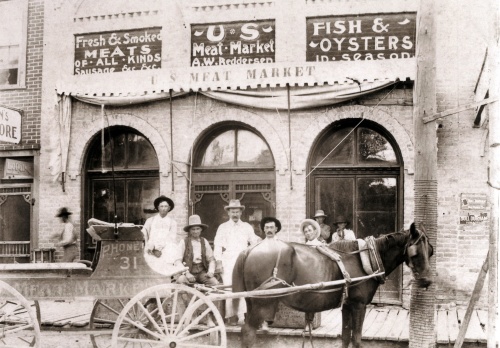 Some of James’ story can be attributed to the fact that much of Oklahoma and New Mexico were still the Wild West in the early 1900s. Yet, that is not enough of an explanation for me.

I fear I will always be left wondering about so many details and nuances of my grandparents’ lives. It is the search and the uncovering of surprises that keep me going. I know that there will always be something else to find out.

This trip also reminded me that there is nothing like feet on the ground when following your family’s story in many diverse locations.

Do any of you have family that resided in New Mexico in the early 1900s? I would love to hear your stories. Who knows, maybe yours cross mine somewhere in Roswell.

Christmas is all about family for me. Tonight and tomorrow will be spent with my two boys, their spouses and my grandchildren.

This afternoon I am remembering Christmases past with family members who are no longer with me, my dad and my grandparents.

My Paternal Grandparents with Grandchildren 1951

I am also thinking about my ancestors and wondering what their holidays were like. Last month I was blessed to stand on the beautiful land in Arkansas where my great grandfather Moses Crittenden, many of his relatives and other early Cherokee settlers, lived for much of the 19th century.

Standing looking out over where they lived I could feel the community and lives of my ancestors surrounding me. Today I can’t help but wonder about their family holiday traditions over almost 40 years on that land. I hope they can feel the love that I send out to them this day across time and space.