The journey of the early settlers to Cherokee Nation West is a complicated one.  My great grandfather Moses Crittenden was born in Cherokee Nation East Georgia in 1825. The next record that I have found for him is the 1850 census that shows him living in Freedom Township Polk County Arkansas at age 25 with his wife Eda Quniton, age 22. I believe Eda (Edith) is Moses’ niece, his sister Lydia’s daughter.

I am on a constant quest for records that will help me determine exactly when Moses moved from Georgia to Arkansas. His father William Crittenden is shown on the 1835 census as living in Talking Rock Creek, GA.  Both Moses and his father William are listed on the Old Settler Roll of 1851

In the 1850 census in Freedom, Polk County AR there are six Quinton family households listed on the same census record with the Moses Crittenden household.  Moses is listed as a farmer.

In the 1860 census in Freedom AR the Moses Crittenden household is surrounded by six Quinton family households. Moses’ father William, then 80, is living with Moses.  Two important facts are found on the 1860 census.  Moses is now listed as a merchant and in the column under Value Real Estate is the figure 2000.

In November 2013, now knowing that Moses owned real estate in Arkansas, I started a search to try to find information on land owned by Moses Crittenden.  I accessed the following sites which eventually led me to the Bureau of Land Management (BLM) Federal Land Record site.

I sent for a hard copy of the document for under $5.00 I received a printed copy on parchment paper along with a copy of the plat map. 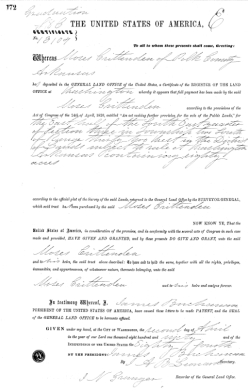 My next genealogy research trip in November 2014 will take me back to Oklahoma and then on to Arkansas.  Finding the exact location of Moses’ land means that I will be able to search local archives, libraries and museums for additional information on my great grandfather’s time in Arkansas.  I will also be able to go to the site of his land, surrounded by the echoes of my great grandfather Moses Crittenden and his extended family.

One of the interesting and frustrating things about genealogy is thinking that you have a clear picture of facts, then you find one more source of information and things you thought you knew are proven to be false. That is the case with my grandfather’s older brother Frank.

When I started searching for my grandfather’s family there was a lot of trial and error, travels down the wrong trails,  and moments of thinking I would never find who my grandfather James West’s parents were. Then, several things came together to prove that I at last had the correct family.

As many of you know there are often families with almost identical family member names, living in the same state, that can add much confusion to your search.

I did, however, at last have the correct family. My grandfather met and married my grandmother in Oklahoma. His family migrated there from Alabama sometime between 1880 and the late 1890s. Once I had identified the correct family in Oklahoma living in the same neighborhood as my grandmother, I was able to work backward and find an 1880 census for my grandfather West’s family in Alabama.

The 1900 census in Oklahoma has son David living in his own household and, nearby, Ben and Sarah living with children James R and Sarah. I wondered what happened to the eldest son Frank? I could not find Frank West in Oklahoma nor in Alabama.

Through my online genealogy research I was fortunate to meet my grandfather’s sister’s grandson and develop an active relationship of exchanging what information we had about the West family. My cousin said he had been told as a child that the eldest brother Frank had started to Oklahoma in a covered wagon but had never completed the journey and the family never knew his fate.

We talked about how much we would like to find out what happened to him on his way to Oklahoma and wondered if that would ever be possible. Fast forward about a year and a half and I made the discovery that our great grandmother, Frank’s mother, had been married previously to a man named Pleasant Frank Johnson, something we had not known. I recently found the marriage certificate for that first marriage. I also found the 1870 census for the West family in Alabama fairly recently.

Much to my surprise, Frank is listed as William Johnson age 7, along with his sister Molly Catherine Johnson. So the reason I could never find a record of Frank West in Alabama after 1880 is that 1880 is the only time he was listed as West and not Johnson on a census. Whether the family did not give his name as Johnson, or the census taker just did not write it down, I don’t know.

This week a search for Frank Johnson in Alabama turned up the following astounding information!

Frank Johnson lived with his married sister Mollie Catherine and is listed in her household in 1900, 1920 and 1930. He died in 1932 one year after her and is buried in Alabama.

Cousin John and I no longer have to worry about our poor great uncle Frank and what happened to him in that covered wagon on the way to Oklahoma. He lived with family in Alabama until his death at age 59.

I wonder how some of our family lore gets started. In that 1870 census where I discovered that Frank and Mollie Johnson were the children of my great grandmother’s first marriage, there is also a 5 month old Arthur, son of my great grandparents, on the census. Arthur never appears again, so apparently died in Alabama sometime before his 10th birthday.

I think somehow a brother’s death in Alabama and Frank’s staying behind in Alabama when the family moved, over the years, combined into one brother who died on the way to Oklahoma.

Have you solved any family mysteries in your search for your roots?