On my current genealogy trip to Oklahoma and Arkansas I am struck by the number of accidental discoveries that are enhancing my efforts at solving the mysteries of my ancestors.

When I came to Oklahoma on my first genealogy trip I was still missing so many basic details in my family’s lineage that the majority of the trip was about filling in the blank spots on the family tree; dates, middle names and first wives or husbands that I never knew existed.

This trip, while I am still filling in a few holes, my main goal is to discover the context and subtler details of my ancestors’ lives. No longer satisfied with knowing in what city and state they were born or lived, I want to know exactly what acreage they inhabited.

When they moved from Arkansas to Oklahoma, why did they make the move? Where did they go to school, to church? I find that my hunger for details is insatiable.

And I am finding that because I know so much more about my family that I am more in tune with leads to follow that might provide answers.

What has surprised me this trip is the casual decision made to say a few words to someone, or open a book that happens to be in front of me, that has led to me finding some missing details that I thought I might never find.

One of these accidental discoveries occurred two weeks ago in Wagoner, Oklahoma. It was a day that I had planned to do some exploring in another county with my second cousin, John. At the last minute he had some work obligations that could not be put off.

Rather than explore without him I decided to wrap up a few local details and reschedule with John for the next day.

One of the items on my list was to go to the Wagoner County Court House to see if I could find a follow-up document to some papers that I had found on my last trip regarding the sale of my grandmother’s Dawes Allotment land in Wagoner County.

While standing at the window in the County Clerk’s office waiting to talk with someone, I turned my head and noticed a very large and very old log book of some kind. It was at least two feet by three feet and four to six inches thick. There were lettered tabs on the right hand edge. 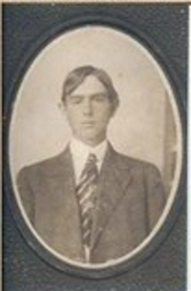 Next to their names were some dates and docket numbers. I wrote them down and when it was my turn to be waited on I asked if this book was just for display or did they have access to these particular old documents.

The answer was that the documents were in storage in another facility and that if I returned in a couple of days they would have copies of them for me. When I returned three days later I was told that they could not find the papers for Moses but that they had an 18 page document regarding the probate listed under Isaac Crittenden.

I knew Isaac did not die until many years after the date of this document so was very curious what this probate document was regarding.

What I found was that on April 1, 1907, shortly after Oklahoma became a state, Margaret Crittenden, Isaac’s mother, had filed to be Isaac’s, then still a minor, guardian over the possessions that he had inherited from his father, Moses, in 1999 and over the Dawes land that Isaac had been allotted.

I knew from census data that my grandmother lived with her mother outside of Wagoner in Township 16 in 1900 and probably for some time before that. I had descriptions of my grandmother’s, and her brother Isaac’s, Dawes allotment land in Township 16. On my last trip I had gone and stood on that land and wondered if any of the allotment land that they received was the land on which they had lived.

And now, this amazing accidental discovery answered a question to which I thought I would never know the answer. At the end of the description of Isaac’s allotment land in the probate papers is the following sentence.

“All 90 acres being Cherokee land with valuable buildings thereon being part of the old ‘M.Crittenden Homestead’. Estimated that 25 acres are in cultivation. This land is part prairie and part timber.

I could have stood at some other window in the clerk’s office. One that did not have an old probate log sitting behind it. I could have not turned around and been curious enough to open it. This accidental discovery could so easily have never been made. But it was. And now I know exactly where my grandmother lived from the late 1890s until she married my grandfather in 1903.

Every day of this trip I feel a little closer to my grandmother and to the amazing life that she lead.