Home is Where Your Second Cousin Thrice Removed Lives

I have mentioned before that my mother’s father left the family when she was about two years old.  Trying to find out more about him and his family was part of my genealogy quest as mother knew nothing but his first and last name.

My mother had about a half dozen photos of her parents early life which she passed on to me when I started researching our history. My goal was to find out more about who my grandfather was and to research my grandmother’s Cherokee ancestry for my mother’s 90th birthday. While searching on ancestry.com I came across a photo someone captioned as Grandma Brewer on Ancestry. Grandma Brewer’s parents appeared to be the same as my grandfather’s parents.

I wrote the person who posted the photo and she wrote back saying I should call someone named John from whom she got the photo and provided me with his phone number. I looked up the area code location and saw that he lived in the area where my grandmother was raised and where she lived for a while with my grandfather.

Something told me this was going to be a big breakthrough and I anxiously dialed the number. Through this call I met my cousin John who is the grandson of my grandfather’s sister. We formed an instant connection and have exchanged hundreds of emails in the past three years.

Last October I went to Tahlequah Oklahoma to continue research on my grandmother’s Cherokee heritage and met with John on the first day of my trip. During my time in Oklahoma John’s cousin (and mine) hosted a huge family barbecue where I met more than a dozen relatives I never knew I had. They shared many family stories/legends about my grandfather, known to them as Uncle Jim. Most had only seen him once or twice but had numerous family tales as he was a somewhat notorious character.

The info I have found on my grandmother and grandfather is a source for many future stories. However, I wanted to share two small tidbits that are were so meaningful to both my cousin John and me.

In our email conversations John told me that he had inherited a rolling pin from his grandmother when she died. It is the rolling pin she used to make numerous pies and cookies at large family dinners which were held every Sunday until she died and attended by all of John’s aunts, uncles and cousins. On this rolling pin an aunt had tied a note, “carved for your grandma on her 10th birthday by her then 15 year old brother Jim, her favorite brother”. Jim was my grandfather.

Me and cousin John with Rolling Pin

The second very emotional connection was that John asked if he could see a photo of my grandfather when he was young. I said I had only a few photos from that time that I had not looked at in a while but I would go through them and see what I could find. In those photos was an old oval photo of my grandmother with another young woman. On the back my mother had written, “mother with Aunt Sally”. This photo was of my grandmother and John’s grandmother as very young women. They would have been sisters in law. I scanned and sent the photo to John who called me in tears saying he had no photos of his grandmother as a young woman. 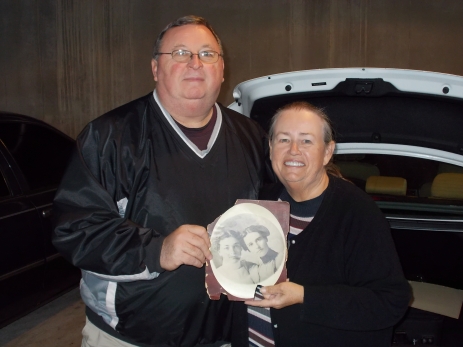 Me and cousin John with our Grandmothers

This family journey has been astounding and I have found amazing things. Including the fact that my grandmother, who we were always told had “some Cherokee blood”, was raised as a Cherokee and never stepped foot out of Indian Territory until she married my grandfather in 1903. Her father was an Old Settler who migrated to Arkansas and then Oklahoma under the New Echota treaty.

The facts I have gathered are interesting. However, what is most meaningful is the connections that I am making.  I saw a cartoon on Facebook a while back.  The caption was “Home is Where Your Second Cousin Thrice Removed Lives”.

After my trip to Oklahoma, and meeting John and other extended family members, a piece of my heart is there.  I am looking forward to returning in a couple of months and making more memories.  Watch in the next couple of weeks for a post about a cousin I just met through my blog site.  She is one of my Crittenden cousins and I cannot wait to meet her in person.